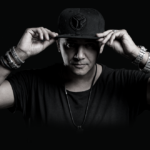 When Q-dance announced an MC Contest named ‘Q-Factor’ in 2006, MC Apster saw his chance to join and make his move.
After sending in a demo-tape he got invited to the contest. During the following 5 month battle Apster made it into the final. In this final he left MC UB behind him and won, receiving a contract with Q-bookings and the recognition he worked so hard for.
Since, Apster has grown into a familiar face on stages both in Europe and abroad. Open to all styles electronicand beyond, this MC has shown his face among a diverse range of events. From house, electro and trance to the harder styles: hardcore, hardstyle, oldschool, Classics and RAW-Style. A skilled vocalist determined to bridge the gap between sound system and crowd. Mc Apster is also the Mc for 2 years on several shows of international artist Dune.
Apster has performed at events/clubs such as Tomorrowland (BE), Privilege Ibiza, Ushuaïa Ibiza, Amnesia Ibiza,Pacha Ibiza, Nature One (DE), Electric Love Festival (AU), X-Qlusive, Thunderdome, Defqon1, Decibel Outdoor, Reverze, In Qontrol, Q-BASE, The Qontinent, Ground Zero Festival, Lakedance, Starbeach (GR), Full Moon Curacao, Theatro Marrakech and many more.Apster is also a resident Mc at the biggest club in the world “privilege” IBIZA sice 2014. Next to performing he invested time into the studio resulting in co-ops with several producers requesting his vocal skills to produce tracks.
Apster has worked with artists the likes ofArmin van Buuren, Martin Garrix, Lil’ Jon, Dimitri Vegas & Like Mike, Afrojack, Hardwell, Quintino, Quinten Mosimann, Nervo, Bassjackers, Nicky Romero, Chuckie, Rehab, Don Diablo, Showtek, Headhunterz, Technoboy, Dune, Coone, Angerfist many more…
Without a doubt one of the most versatile MC’s working today. Continuing to develop his skills, MC Apster is a respected MC in the International dance scene.