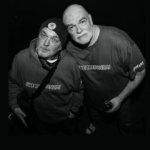 Bonzai All Stars take their epic on-stage antics into the arenas and clubs with a new line-up, featuring original member DJ Fly who is joined by long-term friend Dany Van Der Rieten aka DJ Steel. The mission is the same, to blow your mind with exciting high octane sets that delve into everything retro. That mission has been accomplished many times over, with the guys relentless in their pursuits. Always the ‘stars’ of the show, and they really know how to put on a show, Bonzai All Stars boast decades of experience in the music industry through writing, arranging, producing, DJ-ing and running multiple successful labels, it’s little wonder that they are being snapped up for huge parties and festivals across Europe to unleash their energetic sets.

Christian ‘Fly’ Pieters, founder of the legendary Bonzai Records, lends his long years of experience in the DJ booth to the duo. If there was a party in the nineties, he was at it, ripping it up or providing the beats for the crowd. No one would have believed that starting a small record label in the back of a store would grow into the mega-brand it is today, all thanks to Fly and his colleagues. He has produced his own tracks under various guises as well as contributing to several projects, but it was on (and off) the decks where he gained his reputation. He broke many huge hits, pushing his artists to deliver the best they had to offer. Universal Nation, The First Rebirth, The House Of House and a host of others, are some of the worldwide hits he noticed. He continues the Bonzai legacy into the 2020’s and beyond, nurturing new talent and recognising the importance of the veterans. Joining Fly is Dany Van Der Rieten, who he has known for decades. Better known as DJ Steel, Dany is a veteran of the Bonzai posse having released tracks under Batteries Not Included with Roel Butzen, D-Bedroom Visitors with Stefan Melis (Bountyhunter) on UVM as well as a few cuts on sub-labels from back in the day. Dany regularly takes to the decks with Steve Cop, playing at many Bonzai events and festival line-ups. He recently joined Steve and CJ Bolland as O.R.B. who opened the flood gates of retro-infused techno beats with the launch of the After Dark label. Solo releases on After Dark continue and no doubt, he will be teaming up with those Old Raving Bastards once again.

Over the last number of years, the BAS profile was raised to a massive scale. The original concept was to produce mega mix CD’s filled to the brim with Bonzai’s classic tunes, but this blossomed into a full-on live DJ performance. To date, they have maintained a presence at some of the biggest festivals in Belgium including hosting their own Bonzai stage at Tomorrowland as well as spots at Laundry Day, Summer Festival and Legacy Festival.

On top of all that the annual Bonzai Retro parties are where they round up their hectic yearly schedule with a massive blow out among their many friends. No doubt we will be seeing many more dates lined up so keep an eye on the Bonzai All Stars website for more.

There can be no doubt about the work ethic from the Bonzai All Stars, they know how to whip up the crowd and put on a show, it would be rude not to have them at your party.