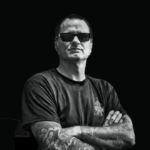 Dag started his DJ career at the Music Hall Frankfurt (Germany) in 1985 with the legendary Monday sessions. From a nearly empty dancefloor at the beginning, he enthused the party people with his own and inimitable music style with the result, that an average of 500 people visited his gigs every Monday. At that time, he also spinned his records regularly at the Aoxomoxoa and the Vogue Club in Frankfurt.

From 1988 on, a dream came true for DJ Dag played the Sunday morning sessions at the World’s famous Night Club Dorian Gray (Frankfurt Airport) for 5 Years. Another successful chapter was the Omen in Frankfurt, where Dag played as a Resident DJ on Saturdays, along with Sven Väth who played the Fridays.

Both Clubs – the Dorian Gray and the Omen – became the most influenced techno nightclubs globally in the early 90’s. Dag’s performances and music at that time was a significant contribution to the Sound of Frankfurt beginning/mid 90’s. And he was the first Dj who called his Music „Trance“, so he gave the Child his name.

He is furthermore well-known for his performances at HR3 Clubnight Radioshow where he played for 18 Years.
In 1997 Dag moved to California and worked there as aResident Dj at Club 1015 Follsom in San Francisco.
International Resident Dj bookings followed at Club UK/ The Complex in London (UK) and Space (Ibiza).
The Cocoon club engaged DJ Dag as a resident DJ until the Club closed in 2012.
He celebrated his 30 years DJ performance in 2015 with a successful Club Tour.

Dag is well-known for playing his DJ Sets with Vinyl.