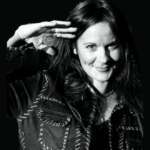 As woman in the DJ business quite a few just grant her an exotic status, but Melanie strengthen her place in the scene already years ago. Working with international big ones and her German colleagues, she managed to get their appreciation.
But that’s not all.

Meanwhile she released several musical projects on vinyl under her own name.

Furthermore the Ruhr-area DJane had an own float under the slogan “Woman at the Turntables” at the Loveparade 1996. Of course there played just DJanes.

Today she is turning the tables at the hottest clubs and events in Germany, Netherlands, Spain, England, Switzerland, Austria, and everywhere around the globe. The hard work paid off.