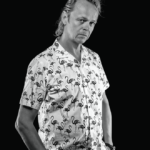 The Dutch entertainer became known to a wide audience in the ‘90s as a DJ, producer and TV presenter. But even today Woody is a busy and successful artist and was even described by Armin van Buuren as “one of the nicest people in the business”.

There‘s no way to miss Woody van Eyden if you are dealing with electronic dance music. Since many decades he fascinates the fans all around the world. Outstanding productions such as “Nangulan“, „Embrace The Rainbow“ and remixes for artists like Armin van Buuren, Aly & Fila, Paul van Dyk and many others regularly appear in the international dance and sales charts.
His trademark, entertaining and even artistic stage performances braced his image as an absolute crowd pleaser and YouTube star, and his unpredictable way of presentation are a true enrichment for any radio and TV Show.